The data displayed in this table is based on the idea that a team's goal differential can be broken down to four components: Shot Rates, Shot Quality, Shooting, and Goaltending. This was originally developed by Andrew C. Thomas for War-On-Ice.com's WAR model (as explained in the 11-part Road To WAR series). This is also the foundation that corsica.hockey's WAR model was built on (additionally discussed here). Our xGAR model is also based on this idea (and inspired by both of the aforementioned WAR models).

This idea can be displayed at a team level by converting the rates, quality, shooting, and goaltending components to a “common currency” (goal values). The below calculations work for each of the strength states currently available (all situations, even-strength, and 5v5) as offense and defense during these strength states is equal.

*** players who fall below these TOI thresholds will be “regressed” to average (0.0)

Penalties included are from all strength state situations

The following penalties are removed:

There are very few observations per season (30/31 teams in a season) so we use a “rolling average” approach to determine the conversion factor. For example, the goals to wins conversion for the '18-19 season includes the team results from the '16-17, '17-18, and '18-19 seasons. Additionally, each season is weighted in the regression based on recency (in this case '16-17 has a weight of 1, '17-18 has a weight of 2, and '18-19 has a weight of 3). This produces a more stable conversion while maintaining the league environment for the season that is being evaluated.

The RAPM Charts use the RAPM metrics we feel are most reliable for skater evaluation. These include:

The respective RAPM ratings used in the RAPM Charts are centered and scaled around the positional mean (Forwards/Defensemen) of the selected timeframe using Z-Scores. This is done so each RAPM rating can be viewed on the same “level” as the others. Using Z-Scores we can look at how a player has performed relative to all other players at the same position over the selected timeframe.

*** Note: The GA/60 ratings that result from the Goals RAPM regressions are inherently influenced by the goaltender behind the skater and are problematic for defensive evaluation. They are not included in these charts for this reason. 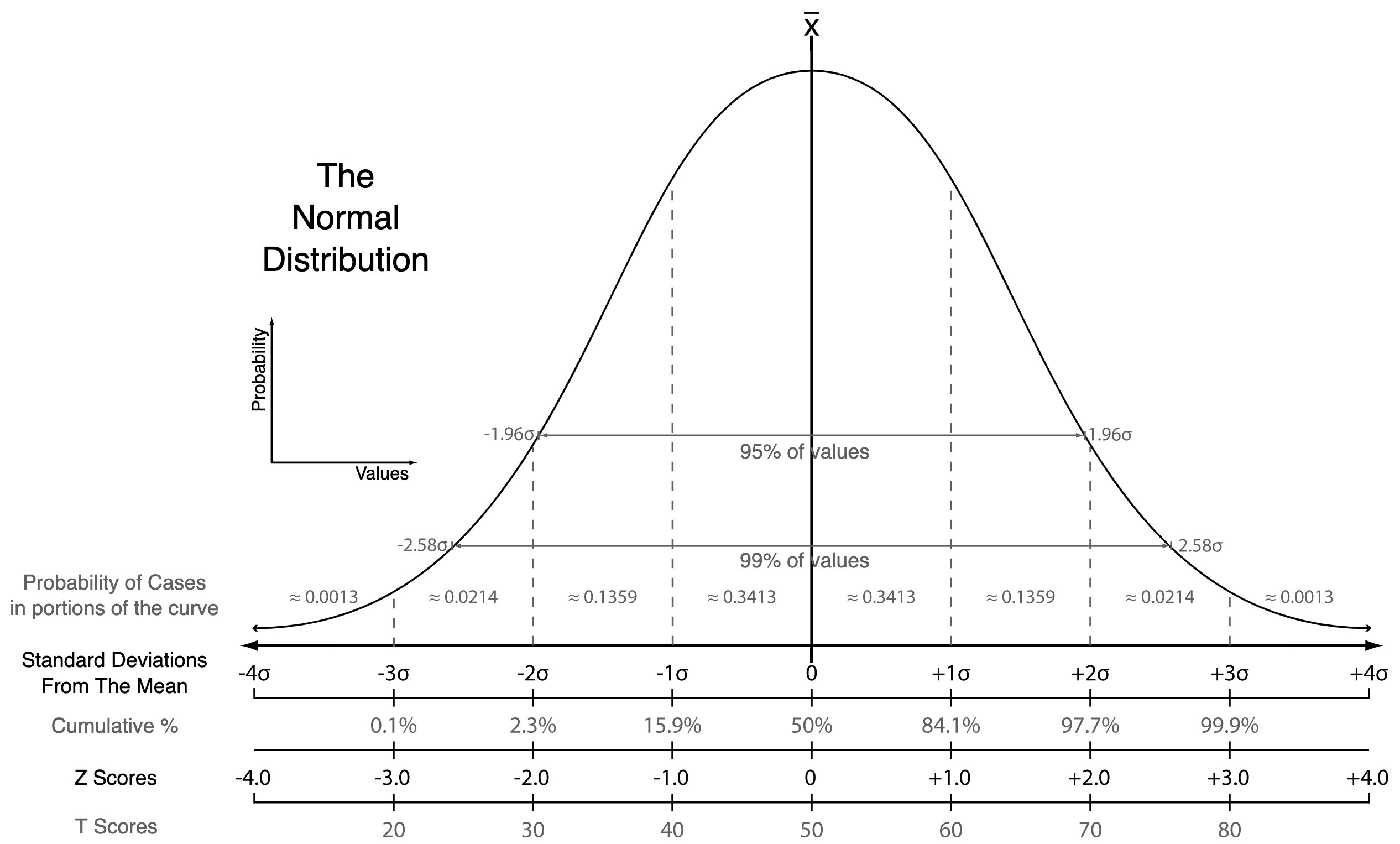 The similarity scores found on the site are determined by calculating a weighted euclidean distance between one player and all other players who:

The following metrics are used for determining the similarity of two players:

All 3-year and 6-year periods available for each player are summed and converted to Z-Scores (around the positional mean of the respective summed datasets).

The resulting distance measures are then re-scaled to be displayed from 0% - 100% using the following calculation (where the min and max are taken from the entire respective 3-year and 6-year datasets):

These projections are modeled using data that CapFriendly has graciously made available to us. In addition, we've used metrics available on our site along with biographical/draft information from the NHL. The final numbers that you see are the outputs of two separate models that work in tandem. The first model is built to predict the length of a given player's future contract (term). A contract can be anywhere from 1 to 8 years in length. Our dataset does include contracts from the past that were longer than 8 years, but these have been adjusted to 8 years in the model for continuity. The second model is built to predict a given player's salary cap % (a contract's % of the cap ceiling excluding bonuses). Predicting this percentage allows us to control for the change in the NHL's salary cap year over year. For our term model, we used Random Forest. For our cap % model, we used Cubist.

Both of these models use a weighting system that takes into account up to the prior 3 years a given player played in the NHL. If a player signs an in-season extension, we determine prior years based on whether they signed before or after February 15 within a given year. (Before: the prior year is the prior season. After: the current season stats are used). Each prior year is weighted as follows, where “n” represents “now”:

These weights were determined based on a lengthy cross-validation grid-search process (25 total sets of weights). In addition, other tests were performed on the 3 sets of weights that performed best in cross-validation for each model to determine the most robust system. If a player has less than 3 total seasons in the NHL, we weight differently. For two-year players, the n-1 and n-2 weights are used. For one-year players, we use only the season they played previously. A note: this model is designed with NHL players in mind. If a player does not have NHL data (i.e. they have not played in the NHL - ELC, KHL, etc.), then they are excluded from these projections.

The following features were included in both models to varying degrees:

As mentioned, these two models work in tandem with one another - a given contract's length (term) is included in the cap % model. This allows us to project the total contract value for any length between 1 and 8 years. Predicting term is a multiclass classification problem - there are 8 possible outcomes. This model assigns probabilities (between 0 and 1) for all 8 years, where the term with the highest probability becomes our “expected” term. The cap % model is built using the “known” term for a given contract, and we predict cap % for every player for every possible term (1-8 years). The cap % associated with the highest probability from the term model is chosen. The dollar amount displayed is based on the salary cap input by the user (we've set this to $84MM). The final value comes from multiplying a given player's cap % by the total salary cap (a 10% player in an $84MM cap league = a $8.4MM total cap hit).

We've also added some new features this year that not only add flexibility overall, but also significantly improve each model's respective performance: Signing Period (or the “Period” column) and “Signs With”. Signing period works like how it sounds: at what point in the year was a given contract signed? For this feature, we arrived at three “periods” within the year that a given contract can be signed - both of these features significantly contribute to both expected term and cap %. For display purposes, we've set this as “July”, but the other periods are available for you to look at via the “Signing Period” dropdown.

“Signs With” is a binary feature that accounts for whether a player signed a given contract with the team that they most recently played for (yes / no) - for projected contracts, this takes the form of “if a player signs with their previous team or with a new team, what do we expect their projected contract to look like?”. For display purposes, we've set the dropdown so all UFAs sign with a new team and all RFAs sign with their previous team. However, you can look at both options for UFAs and RFAs. It's important to keep in mind that RFAs who sign with a different team are rare cases; the model doesn't have a lot of prior data to work with here, so please take these projections with a grain of salt. A NOTE: we are NOT predicting whether a given player will sign with their prior team or with a new team. We are simply allowing users to view both scenarios, for all players.

While this does a good job accounting for 8-year contracts overall (please reference Rule 50.8, subsection (b) (iv) of the CBA), it doesn’t do this perfectly. Alex Pietrangelo, as of this writing, is still projected to sign an 8-year deal with a different team, which is impossible. For now, we've chosen to leave this as is since it's somewhat telling of just how “valuable” the model(s) think he is based on historical signings. But please keep in mind: he can't sign an 8-year deal with a different team, nor can any other player.

Finally, we've made projections for all active players available as well (anyone who played more than 1 game in the '19-20 season) - the “Free Agent” dropdown. Looking at non-free agents, however, can be a bit strange since this assumes that any and all players could sign a new contract at any given time. This isn't really how it works and is unrealistic. Even more important here is that players who recently (within the last 3 years) signed a contract will likely be quite close to their previously signed contract since both models were trained using those same recent contracts. While both models are significantly weighted towards the most recent season, the “biographical” features will be the same, and recent players' metrics will be similar overall. It's best to disregard projections here for players who signed a contract within the last 3 years, or at the very least, understand that their results are going to be biased (close to their previous contract).