Evolving Weekly: A New Season Among Us 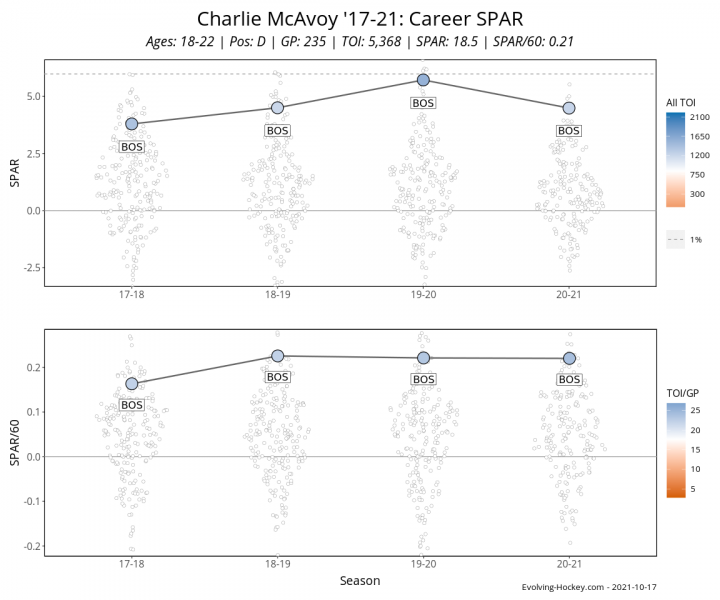 Thanks for clicking on the first-ever Evolving Weekly. As we continue to add to our media content, we thought it would be a wonderful idea to have a weekly newsletter to recap the events of the week and help support the podcast. Enjoy!

Let’s also take a moment to admire the effort the Kraken and their media members are making to educate fans, especially in the area of analytics. The Post-Game Instant Analysis on the Kraken + Climate Change Arena app is something we’ve never seen before. It gives Kraken fans access to a new world of stats to settle themselves down after an exciting game. Furthermore, Analytics with Alison has been a great segment. Alison Lukan sources information from Evolving Hockey as well as our peers in order to break everything down in a consumable way for the average fan. Hopefully, other teams will follow in the Kraken’s footsteps.

The Youts of the Atlantic

On Tuesday, the Montreal Canadiens and Nick Suzuki kicked off a string of signings for Northeastern-based franchises. While it is unpleasant to think that 2030 is only eight years and a couple of months away, the Habs and Suzuki agreed on a contract extension that will expire in the summer of 2030. After the Kotkaniemi offer sheet, it seems as though the Canadiens were not allowing a similar incident next summer. Although he’s unfairly compared to Patrice Bergeron by the media at times, Suzuki has been a solid two-way presence for the Canadiens since acquiring him from the Golden Knights. His Goals Above Replacement from even-strength defense ranked him 8th among forwards over the past two seasons. With Danault gone, the Habs will be looking for an even bigger step up from Suzuki this season. So far, he hasn’t been up to the task. In three games, the Canadiens haven’t scored a goal with him on the ice. However, it’s a long season and a long contract for the twenty-two-year-old.

On Thursday, the Ottawa Senators submitted their summer assignment at the very last minute, agreeing to a seven-year contract with the draft selection following Jesperi Kotkaniemi. Of course, Brady Tkachuk is one of the most interesting players in our database. The only player to edge out his individual expected goals total over the last three seasons was Alex Ovechkin. However, Tkachuk only has 60 goals on 88.9 expected goals. Pair that with some lackluster defense and he doesn’t really live up to the star status he has. 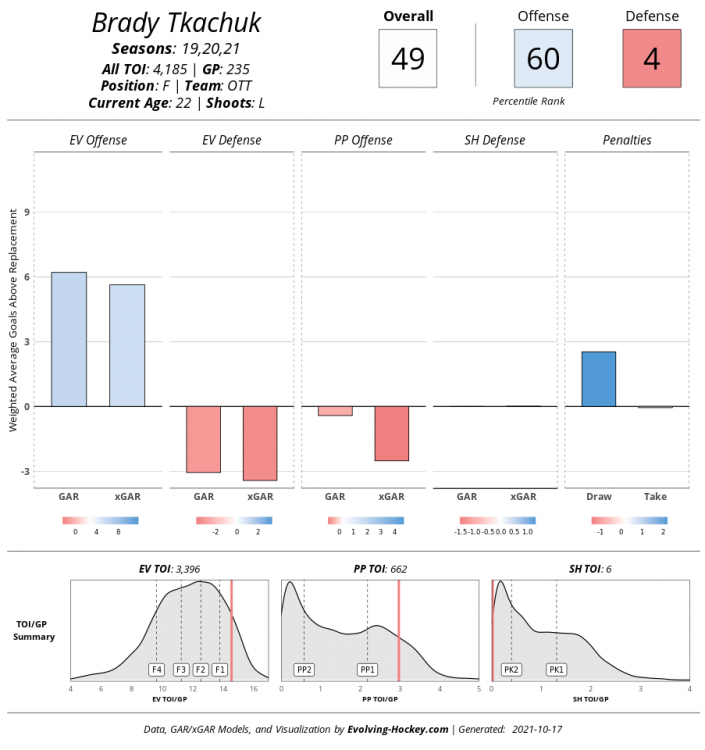 Of course, this contract is about more than his on-ice play. Tkachuk is the Ottawa Senators and the sicko mentality. Whether or not they overpaid for the product they receive on the ice, it’s good to see him locked up for a long time for Ottawa Senators fans.

The very next day, the Boston Bruins decided to finally wrap up the Charlie McAvoy extension, signing him thru 2030 as well. The former BU Terrier has given consistent performances as a number one defenseman since entering the league as a teenager. 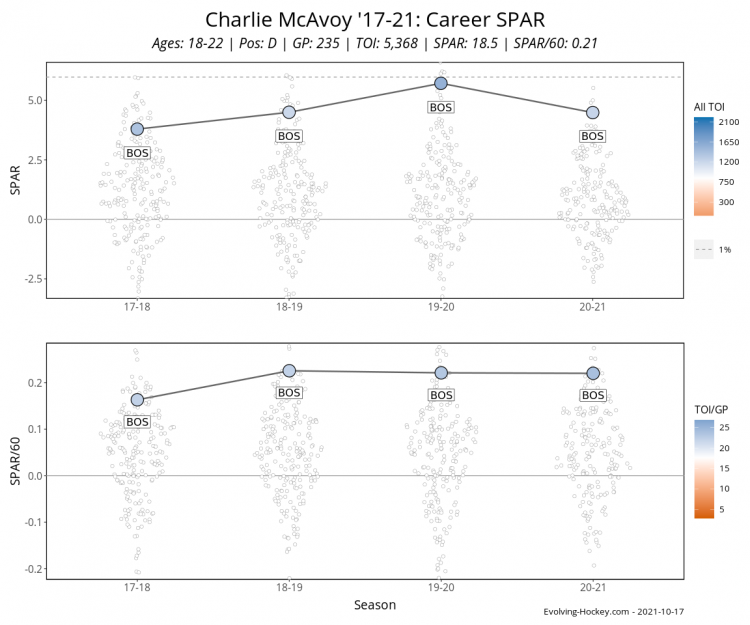 Wrapping this up before the season starts will allow the Bruins to place him on the first powerplay unit with Brad Marchand, David Pastrnak, Patrice Bergeron, and Taylor Hall without worrying about affecting his cap hit moving forward. The question now is how will this affect Adam Fox’s next contract?

Blackhawks Struggle in Week One

When Team USA announced the first three players of the 2022 US Olympic Team, you might’ve noticed that two of those players were Chicago Blackhawks. Well, those two players are still searching for their first wins of the NHL season after falling short to the Avalanche, Devils, and Penguins. Chicago only made up 32 percent of expected goals, 39 percent of shot attempts, and 16 percent of goals at 5v5 last week after adjusting for score state and venue. Both Kane and Jones were -4 at 5v5. The Blackhawks will play the Islanders on ESPN Tuesday night, where one of the teams will secure their first win of the season.

Buffalo Sabres on Pace for 82-0

Before the season started, we were considering whether or not the Sabres would be one of the worst teams ever constructed. Their 2014-15 tank for McDavid, a failed effort with Jack Eichel as a concession, was a formidable comparison. Now, we might be talking about whether or not the Sabres are the greatest team ever constructed. Okay maybe not, but it was an exciting first two games where the Sabres won on some level of merit against an average team coming off a game the night before, and another really bad team flying thousands of miles east to Buffalo. At all situations, the Sabres had a 60 percent share of expected goals and had a 96 percent save percentage. The Sabres couldn’t hope for much more out of the first two games.

Goalies are voodoo. If you want proof, look no further than David Ayers performance in Toronto that cold winter night. With that, rookie goaltenders are rarely considered for the Calder. The last goaltender to win the Calder was Steve Mason in 2009. Prior to that was Andrew Raycroft in 2004. Unfortunately, neither of them had very long careers.

This season, there are three goalies in the early running for Calder. The first is Spencer Knight of the Florida Panthers. The Boston College product appeared in 4 games last season, allowing 1.49 more goals than expected while posting a 91.7 save percentage. That’s hardly anything to go off of, and the first-round pick is thought of highly around the league and in the betting markets. He’s the favorite of the three.

Next is Alex Nedeljkovic. To be honest, I didn’t realize he was still technically a rookie before doing a bit of research for this. He shined in Carolina last season, saving 13.25 more goals than expected in 23 regular-season games. He finished that off with a fair playoff performance, appearing in 9 games there. As an RFA, the Hurricanes decided he wouldn’t be a part of their future and traded him to the Red Wings for a pick and pending UFA Jonathan Bernier – who eventually signed in New Jersey. Nedeljkovic will have a much tougher job behind the Red Wings, and likely won’t put together the traditional stats to be in contention regardless of how well he performs.

Then there is Jeremy Swayman. When the Bruins signed Linus Ullmark to a four-year contract with an average annual value of $5 million in July, it seemed as though Swayman would be set as backup. However, when the Bruins took the ice for their season opener on Saturday night, it was Swayman’s net. In 10 regular season appearances last season, Swayman saved 4.83 more goals than expected with a 94.5 save percentage.

Saturday night, Swayman only allowed a single one of the 28 shots on goal he faced into the net behind him. More than a handful of them were high-quality chances, including a Radulov rebound attempt from point blank. If what we saw last season and Saturday night continues, we could see the Alaskan win the Calder Trophy this summer.