Why Jared Spurgeon Will Be the First Analytics Hall of Famer 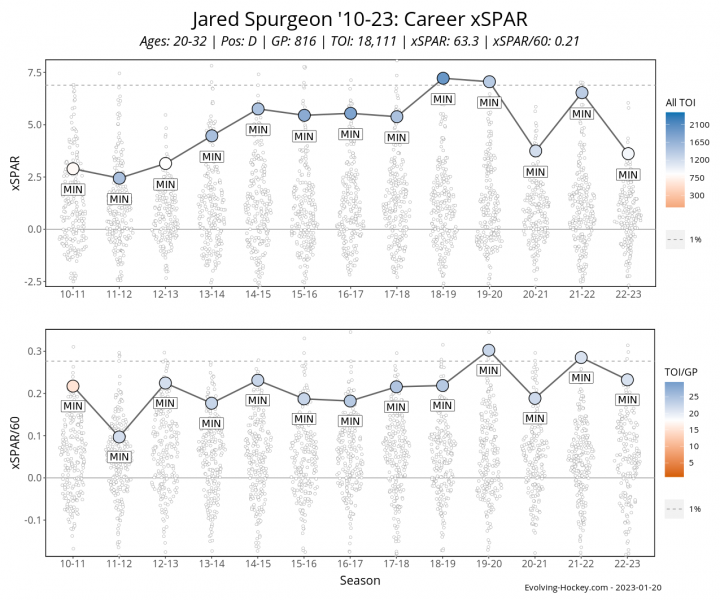 Being about three decades late to the party, Advanced Stats in hockey have yet to make the impact on Hall of Fame voting that SABRmetrics has in baseball. That’s probably going to continue for a while, given both the gap in time since SABRmetrics’ introduction in the 1980s and the information, as the metrics we use today have only been around since 2007-08.

Eventually, though, the advanced stat revolution in hockey will work its way up to Hall of Fame voters, just as it did in baseball. Thanks to SABRmetrics, there are players that never got a whiff of consideration before the invention of VORP that are in now. Bert Blyleven, Tim Raines, and Larry Walker stand as the prime examples of this phenomenon.

All three of those players were obviously great while looking at them through the lens of advanced stats, but underappreciated in their own time. It took years for the realization of their greatness to permeate through the voters.

The NHL will certainly have players like that, now that we have the tools to evaluate them on a deeper level. Who’s our best guess for the first player to do this? Jared Spurgeon.

Spurgeon has always been a favorite among Evolving Hockey’s sphere, but even our die-hard readers might be surprised to see him seriously proposed as a Hall of Fame-type defenseman. By any conventional metric, he falls short. His career-high in points is 43, and he’s not on track to break it this year. His career plus-minus (it’s disgusting to even type this!) is +100, lower than someone like Dmitry Orlov, a perfectly fine defenseman. Zero Stanley Cups.

The points are the likeliest stumbling block, though. When was the last time a defenseman made the Hall of Fame without ever hitting the 45-point mark in the NHL? Slava Fetistov, and that almost certainly wouldn’t have held if he entered the league before age-31. Fetisov also had to have two Cups and one of the most storied international careers on his side.

On top of that, Spurgeon rarely scans as a Hall of Famer according to the eye test. He’s not only never won a Norris Trophy, but has yet to even crack the Top-10 in voting. Long-time teammate Ryan Suter took up most of the oxygen in terms of points, reputation, attention, and votes.

Examine the votes closely, and you’ll see that he’s only been on anyone’s ballot seven times in his career. To put it another way, only seven writers, tops, have ever thought of him as a Top-5 defenseman at any point in his career.

It might take another couple of decades, but the hockey world is going to look back on this and ask, What the hell were we thinking?

Dating back to 2007-08, here are the career leaders in Expected Standings Points Above Replacement (xSPAR):

In terms of career impact, Spurgeon outpaces nearly all the competition. This includes Norris Trophy winners such as Roman Josi, Brent Burns, Drew Doughty, and Duncan Keith. This isn’t some quirk of using xSPAR instead of SPAR, either. Spurgeon’s 46.7 career SPAR ranks fifth in the NHL since 2007-08, behind Giordano, Victor Hedman, Zdeno Chara, and Suter.

Every name you see ahead of Spurgeon on either list is at least a borderline Hall of Famer, and everyone but Suter is probably a slam dunk. Yet, he’s not seen in that light.

You can look at these lists and ask whether Spurgeon is simply benefitting from longevity. After all, Spurgeon’s had 13 years in the league to compile his stats, with almost no signs of slowing down. But what about players like P.K. Subban or Mike Green, who had fantastic peaks, but early declines. Are players like that more Hall-worthy than Spurgeon?

To answer this, let’s borrow a concept from baseball called JAWS. JAWS, or Jaffe Wins Above Replacement Score, invented by and named after Jay Jaffe, judges Hall of Fame worthiness by equally weighting two primary criteria: How impactful a player was for their full career, and how impactful they were at their seven-year peak.

Spurgeon may have longevity, but does his peak stack up against the NHL’s best defensemen? Here are the top seven-year peaks in xSPAR by defensemen:

Spurgeon sits at No. 2 on the list, behind only Karlsson. Play with the data all you want. Reduce the sample from a seven-year peak to five. Spurgeon still sits at second. Lower it to four years, and he’s tied for fifth, or even three years, where he’s at eighth. Switch over to SPAR, and Spurgeon’s 32.4 mark from 2015-22 stands as the fifth-highest peak or a defenseman in the Analytics Era.

Whether you’re looking at a player’s peak or their whole careers, Spurgeon stacks up against almost anyone savvy hockey fans would have on their short list of future Hall of Famers.

And theoretically, Spurgeon should have more years to compile more value. Since turning 30, Spurgeon’s shown no signs of slowing down. From ages 30 to 32, he is already seventh among leaders in xSPAR (14.1) from a defenseman. Not only does he have the remaining 35-ish games to climb even higher, but this sample of Spurgeon’s career includes the COVID-shortened 54-game 2020-21 season.

It’s hard to predict with certainty who will age well. Injuries happen, and decline hits everyone eventually. But there’s at least some reason to believe that puck-moving defensemen who excel at both ends of the ice are good bets to age well. And yes, that includes even shorter defensemen like Spurgeon.

Brian Campbell (5’10”) played a similar style and role to Spurgeon: A do-it-all, minute-munching defenseman. He was able to play until age 37, and provided significant value until his last season. Boyle was 5’11” and played until he turned 39, and was worth 3.4 standings points in his last season. He might have easily been able to play in his 40s.

Barring injury, Spurgeon should have productive years left in him. That’s probably going to be huge for his eventual case, as compiling absurd career numbers gives him a longevity argument that might be able to overcome the lack of attention he’s gotten over the years.

Make no mistake though: Spurgeon has a legitimate case now, even if he were to retire after this season. There are 307 defensemen to rack up 4000-plus minutes in the Analytics Era, and almost no one has ever dictated play like Spurgeon does.

He’s fourth in controlling the expected goal share at 5-on-5, with 55.6% of the scoring chances being aimed at his opponents’ net. This translates to actual goals as well, as the Wild scored 54.9% of the 5-on-5 goals with him on the ice, which ranks 27th among those 307 defensemen.

Furthermore, he’s one of the best defensive players we’ve been able to measure by virtually every metric. Only Matt Grzelcyk and Jonas Brodin have limited expected goals more than Spurgeon (1.91 xGA/60) for their careers. Expected Goals Above Replacement (xGAR) rates his defensive impact seventh in the entire Analytics Era, and GAR puts him at eighth.

It’s really just the points that are going to hold him back, as he’s tied for 74th in all-situations scoring per 60 since 2007-08 (minimum 5000 minutes) at his position. One day, though, the wider hockey world won’t look at how many points you’ve accumulated, and instead, how great you made your teammates. How well you dictated the game. The many ways a player contributes to winning beyond scoring or assisting on a goal.

When that happens, Spurgeon will be a lock for enshrinement. Will it be in 2035? How about 2050? Is an 80-year-old Spurgeon going to have to wear Scuba gear to his induction in 2070, when the Hockey Hall of Fame is submerged in the boiling waters of a flooded Lake Ontario? We can’t know anything, except that it’s only a matter of time.