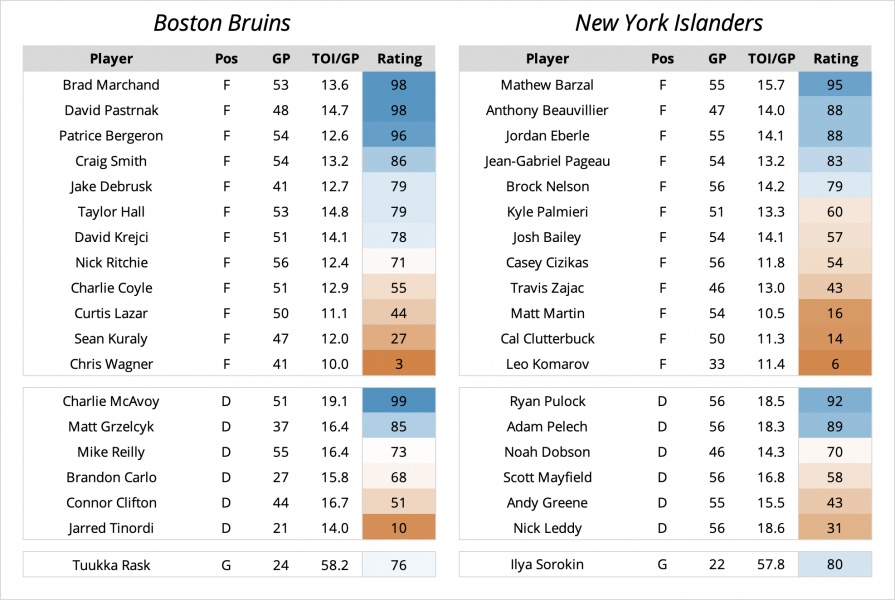 It’s already time for Round 2! We’re down to the final 8 (well at the time of publishing we aren’t quite yet). In the second round teams are still playing within their divisions, and, for the most part, there haven’t been many surprises in round 1. The biggest being the Winnipeg Jets’ sweep of the Edmonton Oilers. We projected the Oilers to win their series (64.3% in 6 games). Our round 1 simulation had Winnipeg sweeping Edmonton ~3% of the time. We were a bit higher on Edmonton than the other public models, but the Oilers were likely the most unlucky team in the first round. Additionally, we did not include Nikolaj Ehlers in our projections, which would have reduced Edmonton’s chances around 5%. The other upset was the Islanders’ 6 game win over the Penguins, but that story is boring. Tristan Jarry struggled heavily during the series, resulting in Pittsburgh owning the worst Goals Saved Above Expected in the first round. The three strongest teams, according to our model, have moved on (COL, TB, and VGK). The sole underdog entering round 2 is Connor Hellebuyck, or sorry, the Winnipeg Jets. In case you missed our Round 1 preview, here’s a quick recap of how the model has performed so far:

The only series that remains is the epic Maple Leafs vs. Canadiens battle in the North, and while we’re “cheering” for the Leafs here because of the model and such, wouldn’t it be fun if it went to 7? (Shawn says no) I mean, technically if we were bettors we’d probably be betting the Habs given our somewhat lower than average series probability. Right? Anyway, let’s dive into the previews. As mentioned at the top, we will be updating this as the series are finalized. For now, the only series that starts today (Saturday, May 29) is the Bruins vs. Islanders. The Hurricanes vs. Lightning and Avalanche vs. Knights previews will be up Sunday morning. Keep an eye out for them! 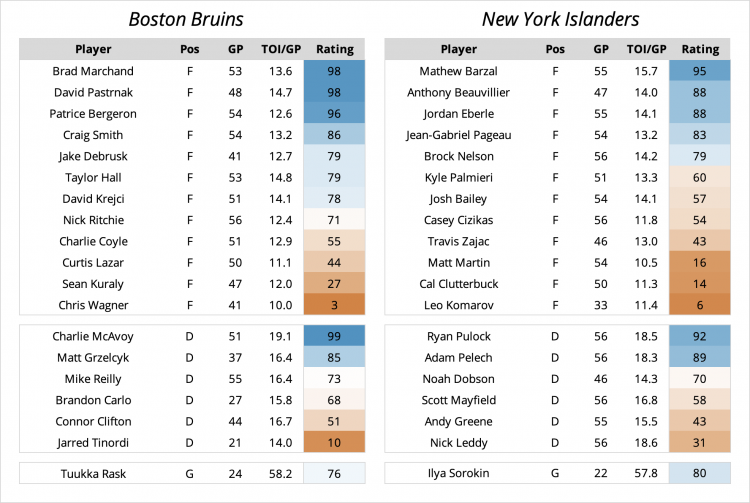 Strange. That’s the only way to describe the Islanders’ postseason so far. The Islanders were lucky enough to run into poor goaltending while having a strong tandem in their own net, helping them overcome a negative share in shots and expected goals. However, they will likely not be as fortunate when facing Tuukka Rask in the second round. Their rather weak powerplay will also be forced to play an effective and aggressive Bruins penalty kill. We’ll also leave it up to you to decide whether or not it was good that Cal Clutterbuck and Matt Martin were the Isles leaders in 5v5 expected goals share while Mat Barzal, Anthony Beauvillier, and Jordan Eberle lurked towards the bottom.

The Bruins made it through the first round with ease. After dropping the first game in Washington, they managed to put together four straight and get a bit of rest before facing the Isles on Saturday night. While the Bruins second line is providing more than recent years with impressive goals by Taylor Hall, the Bruins top line as well as Charlie McAvoy have still managed to produce unreal numbers. At 5v5, the Bruins had a 70% share of expected goals while actual goals were 6-2 in favor of the Bruins. In just short of 60 minutes of ice time at 5v5, the Bergeron line controlled 71% of the expected goals with actual goals were 3-2 in the Bruins favor. If that wasn’t enough, while he wasn’t very busy, Rask was also fantastic saving 2.27 goals above expectation. 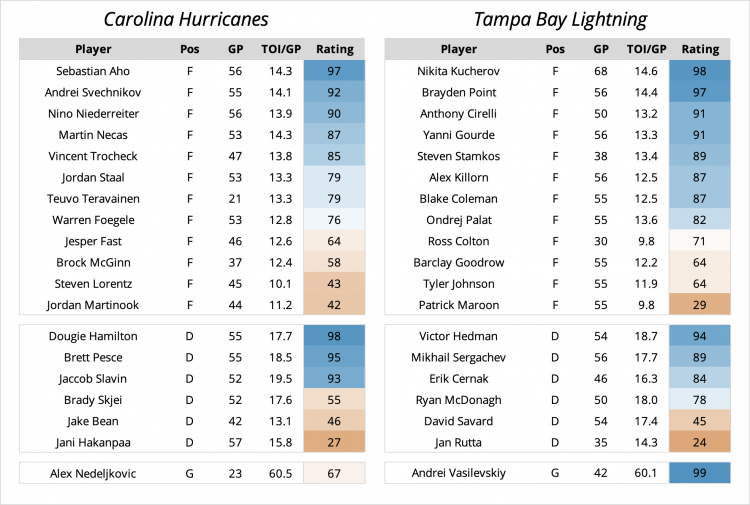 The Hurricanes made things interesting in round 1 against a somewhat surprising Predators team. The goalie question was sorted out prior to game 1, and while Nedeljkovic’s performance in the 6 games didn’t match his stellar regular season, Saros for Nashville was less impressive as to mostly cancel out some slight goaltending issues for the Canes. This series featured the worst goaltending among all 8, but Carolina ultimately leaned on their deep forward group, who all excelled even with some line juggling thrown in. While our “prediction” that Carolina may struggle due to shooting didn’t necessarily come true (5 teams had a lower 5v5 shooting %), this still may be a cause for concern against Vasilevskiy, who had a stellar round 1 (3rd best GSAx among all teams in the first round). Carolina is one of the deeper teams in the playoffs, but they drew a tough opponent in the Lightning, who enter as the 2nd best team in the playoffs per our model.

As we said in our round 1 preview, people are over Tampa, right? That really did actually seem to be the case based on the number of complaints people had after Kucherov’s two goals in game 1 against the Panthers. Hell, even we couldn’t resist a jab at the Lightning’s “good fortune” in our round 1 preview. The Lightning seem to have everything, but if not for Vasilevskiy (and terrible results from Bobrovsky in the limited games he played), they were close to being on the wrong side of an upset. Florida outperformed them in most shot metrics at both EV and on the powerplay, and if not for Lightning’s absurd 35% shooting percentage and 8 goals, they could have been in a similar position to Toronto right now. However, a 6 game series is hardly anything to worry about (ok maybe just a little), but they still enter round 2 as favorites over a strong Hurricanes team. It’ll be interesting to see if Tampa can right the ship, so to speak, from a shot metrics standpoint. They enter with what seem like completely rejuvenated players in Kucherov and Stamkos (both led the team in Rel TM xGF± in round 1). But this series may be more determined by goaltending than any other (save whatever the Jets series ends up looking like). 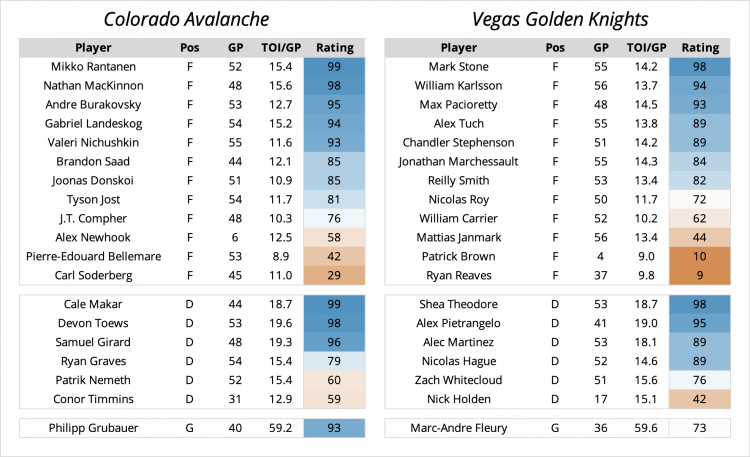 Heading into round 1, our model had the Golden Knights as the 3rd strongest team in the playoffs. We were lower on the Wild than the average modeler, but Vegas still managed to fumble a few games here and there and let the series go to 7 games. A good deal of that can be attributed to somehow managing to lose game 5 in which they out-shot the Wild 200 to 1. However, the return of Pacioretty really propelled Vegas in the final game. The Marchessault / Smith / Karlsson line had the highest 5v5 xGF% (62.4%) among lines that played more than 70 minutes together, and Shea Theodore still heavily controlled chances with whichever partner he had (only his 4 minutes with Hague had an xGF% lower than 50%). Vegas is a very strong team, with few weaknesses and a Vezina caliber goaltender in Marc-André Fleury who posted the 4th best  GSAx among the 16 playoff teams. Unfortunately…

The Colorado Avalanche mowed through the St. Louis Blues like a woodchipper. Their 90.5% series probability over the Blues was in the unheard of realm, and while we projected they’d win in 5 games, in ~27% of the simulations from the first round they swept the Blues. That’s insane within this kind of framework. What else can you really say about this team? We’re all aware their top-4 defensemen group is the best in the league; the Makar / Toews and Girard / Graves pairs dominated in the four games, trailing only the Theodore / Holden pair for Vegas in EV xGF%. While a 4-game sweep is hard to attribute to anything other than luck, in Colorado’s case it’s pretty clear an outcome of more than 5 games would have been surprising. This should be an extremely fun series from two of the best teams in the league. It’s almost a shame it’s happening so early. 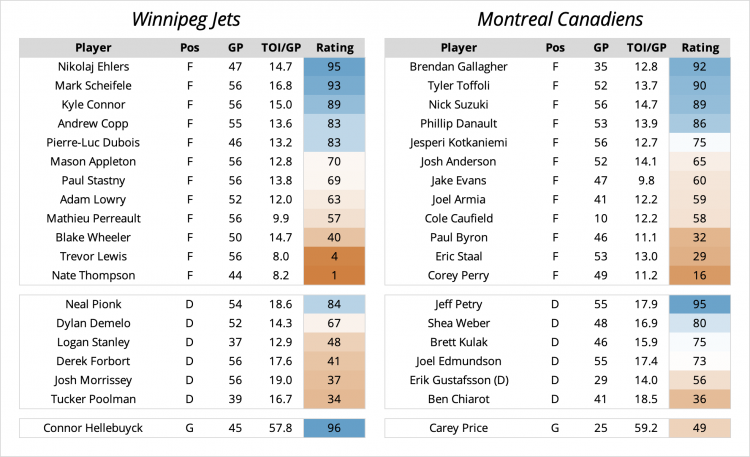 The Habs pulled it off. What the hell just happened. After gaining the series lead after a shocked Leafs team lost their captain to a freak injury, the Habs dropped the next three games. With full commitment to the neutral zone trap, a very strong goaltending performance by Carey Price, and really just terrible luck for the Leafs (it’s a curse it has to be), the Canadiens were able to claw their way back and advance to the second round. The Habs have committed to only using four defensemen (Weber, Petry, Chiarot, and Edmundson) who’ve combined for just a single point. One has to question whether or not that type of usage is sustainable. There will be no doubt that the Jets will try to get some bodies on these four. Additionally, Jesperi Kotkaniemi has emerged as an increasingly important skater for the Habs, scoring the game-winning goal in game six after a volatile few seasons. The Canadiens may have moved on, but it’s not fully clear how they did it other than Price’s great series. We’re still trying to figure that out. For now we’ll just credit the Caufield / Suzuki / Toffoli line at EV.

The Jets, like the Colorado Avalanche, have been waiting a bit to figure out who they’ll play in the 2nd round. While they have this in common with the Avalanche, almost everything else is worse. Well not quite. Perhaps those internal analytics really pushed them past Connor McDavid and the Oilers, or perhaps they just pulled off an upset in the most improbable fashion. Per our model, Connor Hellebuyck had a phenomenal series, stopping 6.82 more goals than expected. The reigning Vezina winner is someone no team would want to face 4-7 times in a row. He will leave each and every shooter with nightmares, win or lose. The team in front of him, however, is not quite as good. Only the Blues and the Capitals gave up more xGA/60 than the Jets’ 2.55 xGA/60, and coincidentally the Jets’ 1.78 xGF/60 was only better than the Blues and the Capitals (the Blues and the Capitals did not win their respective series). However, the return of Nikolaj Ehlers to the Jets’ lineup (missed the first two games of round 1) puts Winnipeg in a much better position entering the second round. This matchup is the closest of any we’ve seen in the playoffs so far – this series is basically a coin toss.